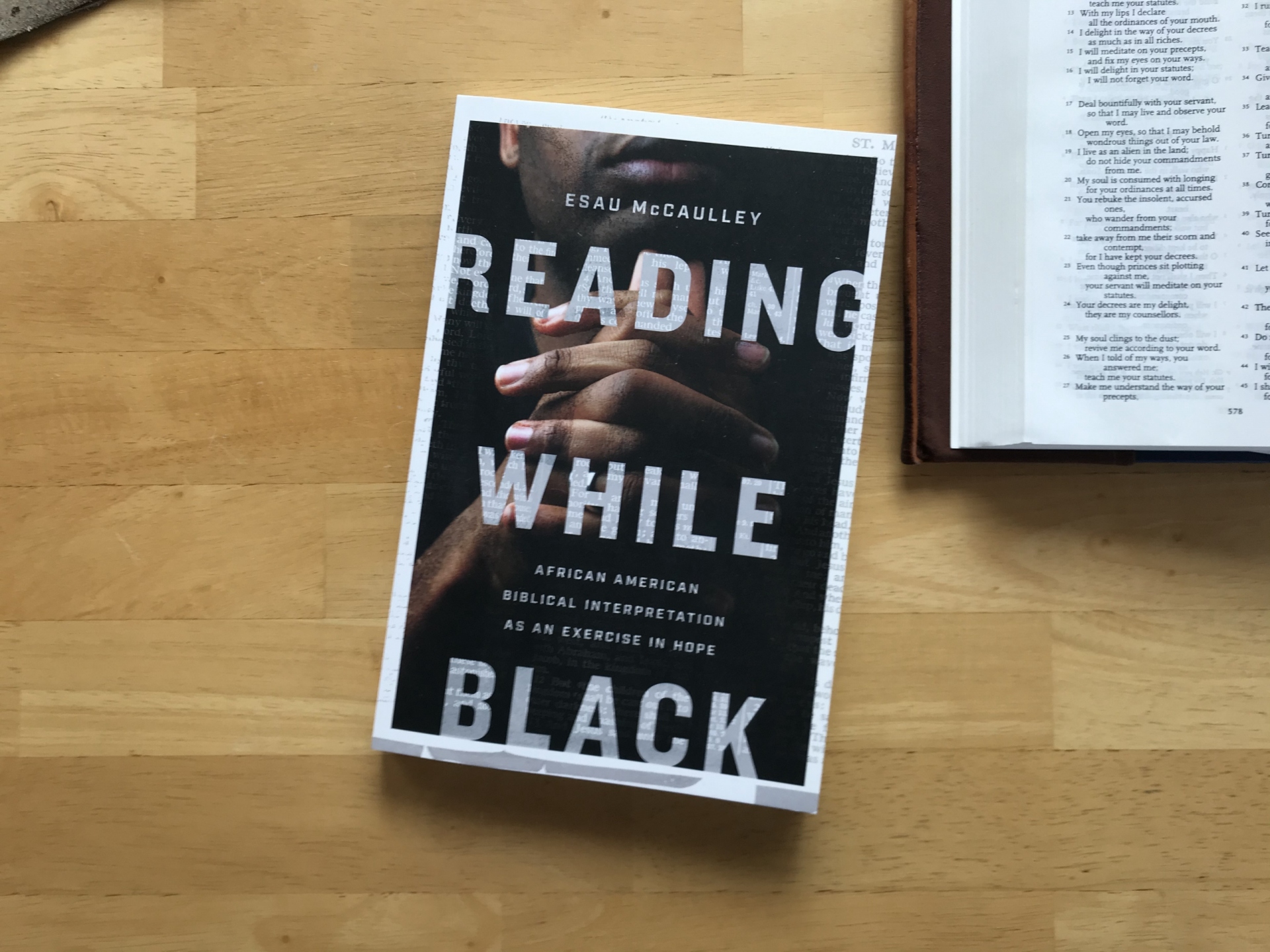 It’s likely you’ve heard of this book because it’s gotten a lot of attention—attention that is warranted. An excerpt, “What Are Police For?” appeared as the cover story in the September 2020 issue of Christianity Today. CT also awarded Reading While Black its Beautiful Orthodoxy Book of the Year Award. The author, Esau McCaulley is assistant professor of New Testament at Wheaton College and a contributing opinion writer for The New York Times. He completed his doctoral studies at the University of St. Andrews (Scotland) under the direction of N. T. Wright and is a priest in the Anglican Church in North America.

I ordered a copy of the book as soon as I learned it was to be published, and I’m glad I did. It’s not just helpful, it’s a significant book that needs to be read and discussed widely by all followers of Jesus.

McCaulley has two goals in mind for Reading While Black. The first is to argue that the biblical hermeneutic developed in the Black church since the time of Southern slavery—what he calls “Black ecclesial interpretation”—is valid from an orthodox Christian perspective. He says this rich tradition of preaching, witness and activism is canonical, theological, socially located, willing to listen to and exercise patience with the text of Scripture, and willing to reflect carefully on all critiques of the biblical text.

If this was McCaulley’s only goal, Reading While Black would be a book for theologians and church historians—I assure you it isn’t, and so the book isn’t. I fear some Christians might hesitate to read Reading While Black because it’s about hermeneutics, a topic not known to attract a large audience. It is on biblical interpretation, but don’t let that deter you. For one thing, interpreting the Bible correctly should be the concern of every follower of Jesus. Besides, McCaulley writes for a popular audience, and all thoughtful Christians can understand and benefit from what he presents. And for those of us who have a scholarly interest in the topic, he includes a sixteen-page optional “Bonus Track” at the end to go into more detail on the development of Black ecclesial interpretation. The rest of the book—the vast majority—is in pursuit of his second goal.

McCaulley’s second goal in Reading While Black is to apply the rich tradition of Black ecclesial interpretation to a series of critical issues in order to shed the light of God’s word on the shape of Christian faithfulness in a racially divided America. The six issues he addresses in six enlightening chapters are:

1) a theology of policing,

2) the political witness of the church,

3) the nature and pursuit of justice,

6) the Bible’s teaching on slavery.

In other words, he speaks directly into our cultural moment. These are topics every evangelical—especially every White evangelical—should be eager to reflect on with care, prayerfully, unhurriedly, biblically.

One of the most significant things about Reading While Black is that in it McCaulley does exactly what all followers of Jesus should do when we find ourselves facing civil unrest, political uncertainty or some other cultural challenge in a divided world. He invites us not into discussion about partisan politics, ideologies, policies, candidates or programs, but instead, first to Holy Scripture to ask, “What does God say?” He thereby de-politicizes politicized issues so we are free to revisit our most foundational convictions and values, and prayerfully consider how to apply them faithfully and winsomely to the challenges we face living in the world. This is the pattern we should always follow. Parsing political questions is an important part of Christian faithfulness, but that can only be accomplished when our minds, imaginations and affections have been shaped by the truth of God’s word. Going back to Scripture should be our instinctual response when facing serious challenges to life, faith and culture.

I should add that at times I was frustrated by Reading While Black. At various places McCaulley’s conclusions go further than is warranted by the specific biblical texts under consideration. This is not because his conclusions are mistaken—they are not mistaken—but because the topics he is covering require much more space than is possible in a single chapter in a single book. A theology of policing, for example, needs an entire book on its own, not just one chapter of 21 pages. McCaulley acknowledges this limitation. “The questions I have asked deserve much greater scrutiny,” he says. “These chapters are sketches toward a much deeper and wider engagement with the Bible and the hopes of Black folks” (p. 166). If Reading While Black prompts us all to further Bible study and stimulates biblical scholars to unpack these issues in greater detail, McCaulley’s fine effort will be multiplied and the Church blessed.

Repeatedly as I read, Reading While Black revealed that my hermeneutic has often been too narrow, restricted by my limited cultural setting and background. I always ask what the text is saying to Christ’s followers but far too often I have limited that to followers that look like me. Loving my sisters and brothers in the multinational, multiethnic, multicultural Church means I am called to eschew narrow parochialism, listening and learning so that my perspective reflects at least some measure of the breadth of God’s grace in his people. Too often I have failed; mea culpa. I’ll give one example. I’ve long been aware that in the story of Scripture people from a wide variety of ethnic backgrounds became part of the people of God. McCaulley’s treatment of such texts, however, convinces me I’ve not dealt with them with sufficient rigor. Far more is to be gleaned from them than I understood—consider this reflection by McCaulley on Genesis 48:3-5. It deals with the fact that while in Pharaoh’s court, Joseph married an Egyptian woman and had two sons, Ephraim and Manasseh.

After the dramatic reconciliation between Joseph and his brothers, the family is reunited and takes up residence in Egypt. Toward the end of Jacob’s life, Joseph brings his two boys to be blessed by his father. Meeting these two half-Egyptian, half-Jewish boys causes Jacob to recall the promise that God made him many years prior:
“And Jacob said to Joseph, ‘God Almighty appeared to me at Luz in the land of Canaan, and he blessed me and said to me, ‘I am going to make you fruitful and increase your numbers; I will make of you a company of peoples, and will give this land to your offspring after you for a perpetual holding.’ Therefore your two sons, who were born to you in the land of Egypt before I came to you in Egypt, are now mine; Ephraim and Manasseh shall be mine, just as Reuben and Simeon are’” (Genesis 48:3-5).
Jacob sees the Brown flesh and African origin of these boys as the beginning of God’s fulfillment of his promise to make Jacob a community of different nations and ethnicities, and for that reason he claims these two boys as his own. These two boys became two of the twelve tribes of Israel. Egypt and Africa are not outside of God’s people; African blood flows into Israel from the beginning as a fulfillment of the promise made to Abraham, Isaac, and Jacob.
As it relates to the twelve tribes, then, there never was a biologically “pure” Israel. Israel was always multiethnic and multinational. As a Black man, when I look at the biblical story, I do not see a story of someone else in which I find my place only by some feat of imagination. Instead God’s purposes include me as an irreplaceable feature along with my African ancestors. We are the first of those joined to Abraham’s family in anticipation of the rest of the nations of the earth. [p. 101-102]

“What I have in mind,” McCaullay says, “is a unified mission in which our varied cultures turn to the text in dialogue with one another to discern the mind of Christ” (p. 22). This is a wonderful and much needed vision for Christ’s Church in our deeply fragmented world. Count me in as we await the final consummation of this reality in the kingdom that is yet to come in Christ’s eternal reign. “God’s vision for his people,” McCaulley notes correctly, “is not for the elimination of ethnicity to form a colorblind uniformity of sanctified blandness. Instead God sees the creation of a community of different cultures united by faith in his Son as a manifestation of the expansive nature of his grace. This expansiveness is unfulfilled unless the differences are seen and celebrated, not as ends unto themselves, but as particular manifestations of the power of the Spirit to bring forth the same holiness among different peoples and cultures for the glory of God” (p. 106-107).

I recommend Reading While Black to you. It’ll make you a better student of Scripture and provide the beginning of a biblical foundation for faithfulness in our racially divided nation and time.

Photo credit: by the author with his iPhone 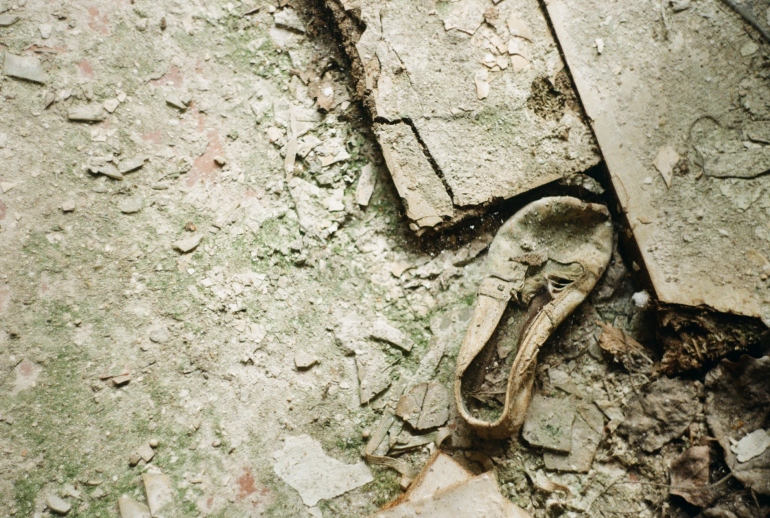 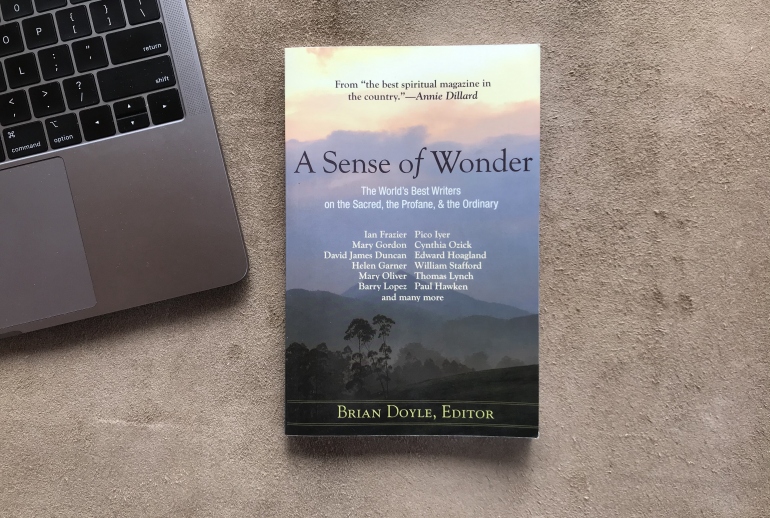